he power spot prices for today dropped by between 16.30€/MWh and 20.58€/MWh from Friday in Germany, Belgium and the Netherlands on forecasts of soaring wind output. Expectations of higher demand however limited the losses in France where prices only eroded 3.15€/MWh to 69.17€/MWh.

The French power consumption rose by 2.83GW to 72.27GW on average on Friday, strengthened by the falling temperatures. The country’s nuclear generation climbed above 51GW to 51.09GW, +0.31GW dod. The German wind production continued to fell on Friday to 6.89GW on average, -7.40GW dod, and remained around that level over the weekend. The production is however forecast to surge back from today and jump to around 36GW by Wednesday.

EUAs tumbled by 1.79€/t on Friday, driven by the falling gas prices amid forecasts of milder weather and bearish equities as several European countries braced for tighter government restrictions to attempt to curb the worsening Covid situation. Several market participants attributed this further retreat from the all-time high of 35.42€/t reached on Tuesday to long speculators unwinding their positions built over the past weeks as only nine days remain without auction while the weather, which has been a strong support so far in January, is forecast to become warmer in the upcoming weeks. Some traders however pointed to the limited downside potential as further losses is likely to raise buying interest from compliance players anticipating the tighter supply to come this year and the EC proposals to reform the EU ETS to comply with the recently strengthened EU 2030 climate ambition.

The sinking gas and emissions prices and forecasts of milder and windier weather weighed on the power forward market which posted heavy losses along the curve over the last session of the week.

In other news, the French utility EDF warned of strikes at its Le Havre coal-fired power plant (0.6GW) from Friday to March 31st. 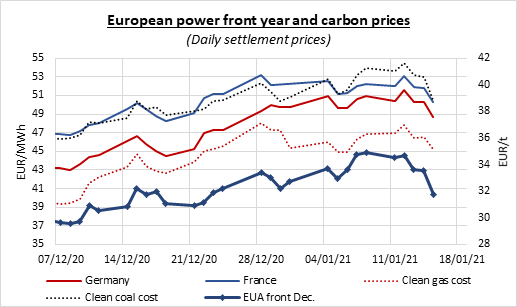 US to tap into strategic reserves

In less than 2 hours yesterday, the price of Brent 1st-nearby first approached $115/b before plunging towards $104/b. It has since recovered to around $113/b.  Fears of…

Crude prices continued to rise yesterday, to reach 75 $/b for the ICE Brent August contract on the backend of drawing US petroleum inventories and supportive macro…

Power and carbon prices rose alongside the gas market