European diesel continues to weigh on the oil complex

Crude oil prices continued on their downward trend, dropping to 63.5 $/b on Monday for ICE Brent prompt month contract. The continued drop from earlier this week and Monday was mainly attributed to worsening sentiment around European fuel demand, as EU vaccination stalled for a week and lockdowns resumed in Western Europe. The continued strengthening of the dollar was another hindrance to crude prices performance, as the dollar index hiked to 92. Finally, crude processing data from India in February felt to its lowest since 4 months, at 4.87 mb/d, as squeezed domestic refining margins and fierce competition on the Asian export market pressured the Indian refining system. 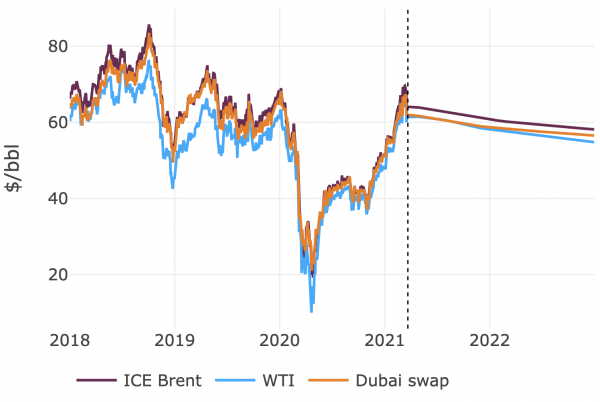 The European power spot prices for today climbed back above the clean gas and coal costs, lifted by forecasts of a weak renewable production and…

EUAs climbed back above 34€/t

Forecasts of colder temperatures and dropping wind output supported the European power spot prices yesterday which presented a hefty 10.37€/MWh gain from the day prior…

Prices dropped from their recent highs

European gas prices weakened yesterday, maybe “reassured” by the fact that Europe has decided (at least for the time being) not to follow the United…
Join EnergyScan