Bond yields have declined significantly on Friday, erasing almost completely Thursday’s rise. This does not mean tensions are over: in the US, the House of Representatives voted the $1.9bn stimulus package that will now be debated at the Senate. A sharp rise in inflation is also coming that will probably fuel further tensions on the bond market. For the time being, the question is whether the correction in the bond market has been too quick and may trigger central banks’ intervention, just as it happened in Australia on Friday. Moreover, the Chinese PMIs kept on deteriorating in February, pointing to an economic slowdown that may be more significant than expected. The EUR/USD is edging up and nearing 1.21 after a marked downward correction since Thursday. 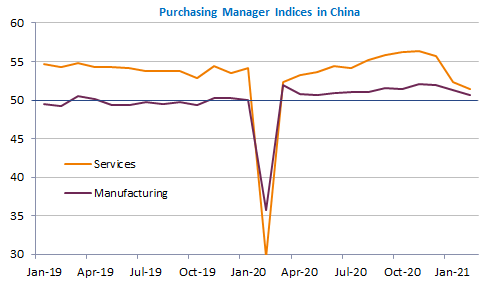 Longer-dated refining margins rallying ahead of the winter

Crude oil prices climbed higher to 74 $/b for ICE Brent front-month contract ahead of the Nicolas weather event, reclassified as a hurricane in the last…

Oil prices are retreating, but Brent 1st-nearby was still above $93/b yesterday. It is back to $91/b, mainly due to the widespread correction in risky assets after…

Is the best is the enemy of the good?