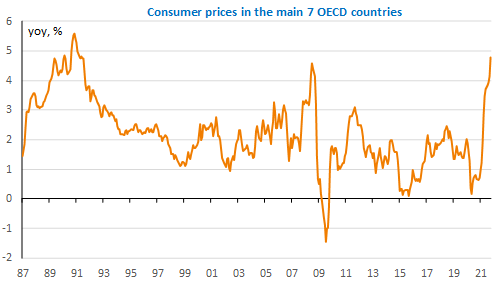 2021 was again a year marked by the pandemic but also by a recovery in inflation to levels not seen for 30 years. There are three main explanatory factors: ‒ energy prices (both a strong base effect due to their plunge in 2020 and a strong increase in 2021); ‒ the disruption of global supply chains due to the pandemic; ‒ raising tensions in the labour market. 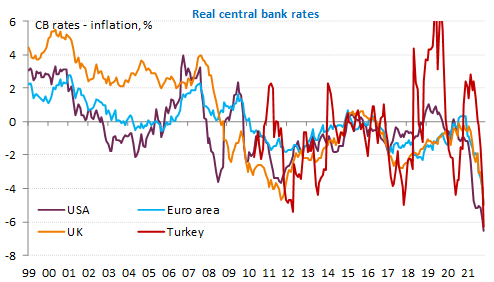 Faced with the persistence of a phenomenon long described as “transitory”, central banks have had to adjust their rhetoric and start tightening their policies. It took them a long time to do so, until they had real key rates as negative as those of the Bank of Turkey! If inflation does not fall as much as they expect in 2022, they will have to raise their interest rates much more than expected today to keep it under control. 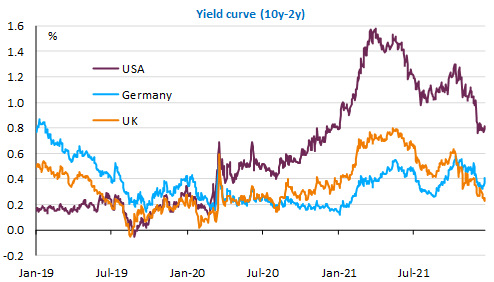 The beginning of 2021 was marked by a sense of euphoria linked to the dissemination of anti-Covid vaccines and the Biden administration’s stimulus plans. The yield curve steepened significantly. This was the “reflation trade”. But this did not last. The markets never really believed in the return of inflation and bet that moderate monetary tightening would be sufficient. The flattening of the yield curve also heralds a significant moderation in activity growth.

2020 had been experienced as a trauma. In 2021, the world has learned to live with the pandemic. Successive pandemic waves have had less and less impact on activity. In the euro zone, it had collapsed in the spring of 2020, had declined further but much less last winter and should continue to progress despite the dizzying increase in cases due to the Omicron variant currently. 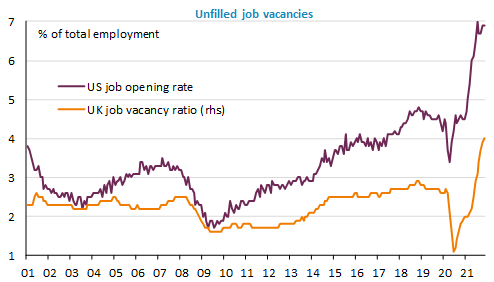 The Covid crisis and its consequences, i.e. the massive use of homeworking and the distortion of the structure and habits of consumption, may have caused major and lasting changes in the labour market. This is especially the case in the US following the sharp rise in unemployment in the spring of 2020 and in the UK where the effects of Brexit have been added to those of Covid. This is less the case in the Eurozone where employment has been preserved by subsidies to companies. There is an unprecedented rise in unfilled vacancies, which is helping to push up wages in some sectors. 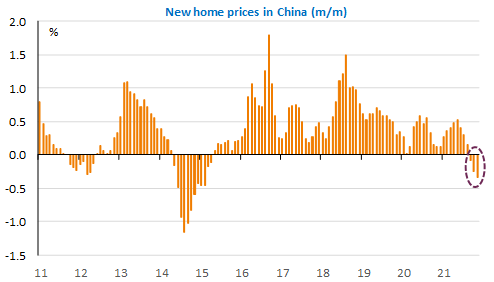 The collapse of Chinese property developer Evergrande probably marks the end of a period of excess that will lead to a structural decline in the rate of growth of the entire economy. According to estimates by former IMF Chief Economist Kenneth Rogoff, the share of broadly defined real estate in China’s GDP growth has been close to 30% in recent years, higher than Spain’s in the 2000s. The slowdown in construction will have a direct negative impact on banks, material suppliers, employment and public finances. A negative wealth effect is also expected on households. Chinese GDP growth, which is still expected to exceed 8% in 2021, may not reach 5% in 2022. 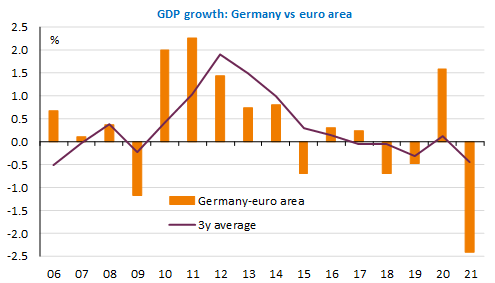 After 16 years in the Chancellery, Angela Merkel left office and her party was defeated in the elections. The new coalition of SPD, Greens and Liberals (FDP) agreed on a programme to accelerate the transition to renewable energies and reduce social inequalities, but without abandoning fiscal orthodoxy. Will it be able to resist these contradictions? The German economy had asserted its dominance over its European partners after the financial crisis. It seemed to be more resilient to the health crisis initially, but has since been overtaken and even surpassed by France and Italy. The automotive sector, the bridgehead of the powerful industry, is being hit hard by the energy transition and the questioning of globalised production chains. 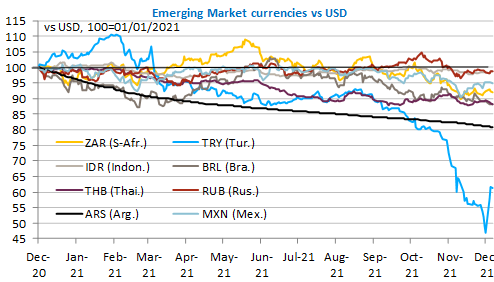 Against a backdrop of USD appreciation (its weighted exchange rate has risen by 7% since the beginning of the year), emerging currencies have held up well, notably because central banks anticipated the Fed’s monetary tightening by raising their own interest rates. One notable exception: the Turkish lira literally collapsed after the dismissal in March of the previous central bank governor who had restored foreign investor confidence. His successor implemented President Erdogan’s iconoclastic precepts that lower interest rates reduce inflation. The bleeding was stopped in the last few days when the government offered a guarantee to savers against currency loss. A disguised rate hike… 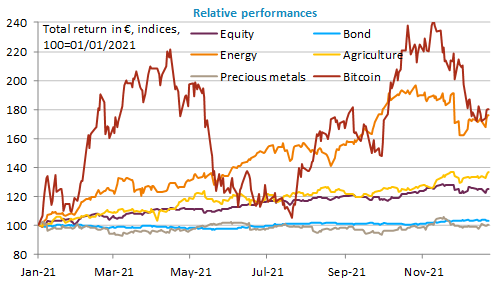 2021 has been the year of crypto-currencies: their total value has almost tripled (about $2300bn today) and investments have diversified. Bitcoin’s market share has fallen from 70% to less than 40%. The performance of Bitcoin over the year as a whole, however, appears disappointing as it does not exceed that of energy commodities and is much more volatile. It is important to choose the right time to invest! However, the value of cryptocurrencies had already exploded by the end of 2020. Compared to the end of October 2020, the value of Bitcoin is up 350%!

Prices strongly up as Russia will seek payment in roubles

Brent 1st-nearby briefly fell back below $120/b yesterday before rising again and now trading above $126/b. The price levels are so high that one gets used…

Oil slumped on Friday: ICE Brent front month dove by 5.6%, to settle at $113.12/b and NYMEX WTI plunged by 6.8% to reach its lowest…
We use cookies on our website to give you the most relevant experience by remembering your preferences and repeat visits. By clicking “Accept”, you consent to the use of all the cookies.
Cookie settingsACCEPT
Manage consent